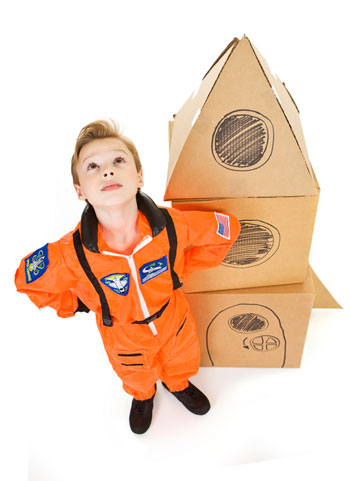 It cost $10 billion and was designed by the best people science and engineering has to offer, with more than 10,000 scientists in more than 100 countries participating in its creation.

Within days of turning it on, however, they knew they had a problem. The Large Hadron Collider, designed to reproduce how matter behaved a fraction of a second after the Big Bang, requires extreme cold to operate correctly. The temperature inside its 27-kilometer tunnel is just slightly above absolute zero — colder than space.

Just days after it began operation in September of 2008, a faulty electrical connection between two magnets caused its temperature to rise to -279.7 degrees Fahrenheit. Six tons of liquid helium escaped, and more than 50 of LHC's dipole magnets had to be replaced. These are not the kind of magnets you would find on a fridge. They weigh about 20 tons. It took months and millions of dollars to repair this machine that intends to unlock the secrets of creation, demonstrating in the process a critical aspect of creativity: You need to follow the rules to get it.

The LHC seeks to explore the ultimate in creativity — the creation of the universe itself — and its reliance on precision and constraint to operate effectively is a metaphor for creativity in far more mundane arenas. Parents and educators seeking to help children develop ingenuity can benefit from understanding the role of rules and effort in a domain long associated with freedom and effortlessness.

The popularity of titles such as Daniel Pink's A Whole New Mind and Richard Florida's The Rise of the Creative Class confirm that creativity now stands shoulder to shoulder in importance with other, more traditional skills and traits. When the IBM 2010 Global CEO Study surveyed more than 1,500 CEOs from around the world seeking insight into what makes a great business person, the trait CEOs identified as being most important for effective leadership was not intelligence or even hard work: It was creativity.

Clifford V. Smith, president of the General Electric Foundation, said, "GE hires a lot of engineers. We want young people who can do more than add up a string of numbers and write a coherent sentence. They must be able to solve problems, communicate ideas, and be sensitive to the world around them." Smith's words describe what creativity looks like today — problem-solving, effective communication, and an open outlook. Psychologists also view inventiveness as far more than being able to draw well. To them, creativity is producing an original idea that has contextual value. 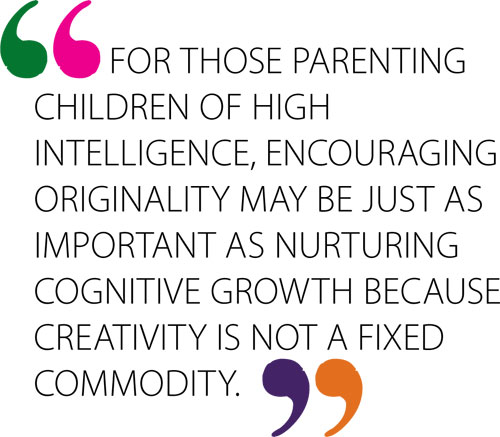 Becoming too fixated on what is often called "Big C" creativity (world-changing ideas) can prevent people from opening themselves up to "little c" creativity, the nearly mundane problem solving that we engage in virtually every day. It's the kind Dr. Gerald Gordon, president and CEO of the Fairfax County Virginia Economic Development Authority, calls "the currency of the 21st century." Creatives, people who use and recognize the value of creativity in a wide range of endeavors, are poised to become the most successful in their fields.

And there's the rub. Although creativity is moving, as the University of Georgia's Mark Runco, editor of Creativity Research Journal, says, "from the art room to the board room," according to recent research, we may be becoming smarter and less creative. Many are familiar with the Flynn Effect, the idea that each generation's IQ scores are rising. The opposite appears to be happening with regard to originality.

According to a study done by Dr. Kyung-Hee Kim at the College of William and Mary, creativity, as measured by results on the widely used Torrance Test of Creativity, is in a decline as precipitous as that of the Roman Empire. Kim analyzed more than 300,000 scores from 40 years of tests and found a steady decline since 1990. Most disturbingly, the greatest decline was in children in kindergarten through third grade. In the past, research cast light upon the "fourth-grade slump," a period around the age of 10 when peer conformity hinders ingenuity. Kim's research appears to signal that the danger of reduced creativity is creeping to younger children just as the marketplace is demanding more inventiveness.

In 1950, J.P. Guilford delivered his presidential address to the American Psychological Association, a talk that became for creativity what Sputnik was for gifted education — it drew attention, research, and even money. Psychologists began looking at what it meant to be creative, how it could be measured, and if it could be taught. In 1979, Dr. E. Paul Torrance described a framework for creativity that included four traits — fluency, flexibility, elaboration, and originality. His test, the one whose results were studied by Kim, measures the way individuals perceive opportunity, and the scoring privileges those whose minds remain open. Interestingly, rules are used to score the Torrance test. Even within the very instrument used to gauge creativity, boundary carries weight, and those who do best resist the urge (or perhaps do not feel it) to render familiar shapes out of the ambiguous prompts.

After a testing session in which teachers were being trained to score the Torrance, one test taker said, "I could have done so much better if they'd just told me ahead of time what they were looking for." To encourage creativity, adults need not see the revelation of the boundaries or origins or the giving of instructions as somehow a form of cheating.

Dr. Mihaly Csikszentmihalyi's work on Flow argues that a new mindset toward originality is necessary, saying, "Creativity is any act, idea, or product that changes an existing domain or that transforms an existing domain into a new one." In this point of view, it is not so much whether or not one is creative as much as it is if one does creative.

It is becoming clear that the doing involves hard work, and it involves restriction to a greater degree than has been commonly recognized. It turns out that creativity can, and often does, partner with constraint and deliberate intention.

Dune author Frank Herbert wrote, "Seek freedom and become captive of your desires. Seek discipline and find your liberty." Herbert's words reveal the paradox of creativity: We often find it within constraint, even in activities that are imbued with freedom. Many pursuits commonly considered inventive clearly benefit from or depend upon constraint and rules. No one would argue that the Blue Angels pilots should break out of their routines and spontaneously express individuality in flying patterns. Like gymnastics, water ballet, and sonnets, precision flying depends upon total adherence to the rules of the game to reveal its beauty.

While no one is suggesting you have to follow all the rules all the time, there is an element of truth to the idea that creativity is not necessarily a free-for-all. The poet e.e. cummings is famous for breaking the rules of capitalization in his poems by using majuscules in unusual ways. So often did he do this that his name is often spelled with lowercase letters. Although his typography was creative, no one doubts that he knew the rules he was breaking. His breaking of the rules was a creative choice made from knowledge and understanding, not ignorance. 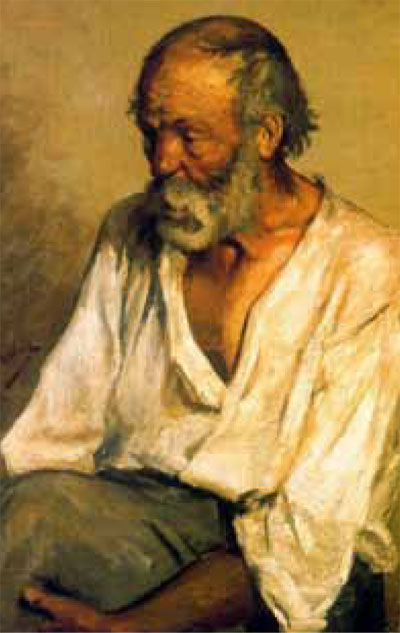 Quick: Who do you think painted this portrait? Let's make it a little easier. Who do you think is least likely to have painted this portrait? If you guessed Pablo Picasso, you're right, and you're not alone. Picasso's strong association with Cubism makes identifying him as the artist of representational art a task best done by backing into it. This painting demonstrates clearly that before he became a master at breaking the rules of art as it existed in his day, he mastered the rules themselves.

This idea applies in the classroom as well, where creativity and cognitive strength often conflict. Teachers want students to work the problems using the methods taught and/or tested, while inventive students want to solve the problems in their heads or by using less conventional methods. The solution for parents and teachers lies in the lessons of e.e. cummings and Picasso: Let them break the rules once they've proved they've mastered them.

The boundaries that can build ingenuity often arise from the habits of individuals during the process of creating. The author Stephen King explained, "There are certain things I do if I sit down to write…There's a certain time I sit down, from 8:00 to 8:30, somewhere within that half-hour every morning…I have my vitamin pill and my music, sit in the same seat, and the papers are all arranged in the same places. The cumulative purpose of doing these things the same way every day seems to be a way of saying to the mind, you're going to be dreaming soon" (Lisa Rogak, Haunted Heart: The Life and Times of Stephen King).

To paraphrase Louis Pasteur, creativity favors the prepared mind. The idea that it should be effortless, that if you must work for ideas you are not truly creative, somehow persists, even though virtually every individual recognized as original would argue the point.

Like a famous actress who gets "instantly" discovered after years of appearing in bit parts and waiting tables, everyday creativity is rarely a eureka moment. Mark Runco explains, "Creative insight is not a quick 'aha!' but instead is protracted." So-called "eureka!" moments do not spring fully formed from the head of Zeus like Athena. Instead, they are the culmination of long periods of work and effort.

When mathematician Andrew Wiles finally solved what had been called the most difficult math problem of all time, Fermat's Last Theorem, many people focused on the amazing "aha!" moment he had in his office one September, ignoring that it occurred after years of effort and a famous false solution earlier. Wiles himself says that mathematics is like going through a dark mansion whose furnishings and walls reveal themselves only after months of study. To be effective creatives, children must be taught that prolonged effort is not the opposite of ingenuity, it is its superfood.

As researchers continue to explore creativity, the themes of effort and boundary arise again and again, not as its only components, just often overlooked ones. It is up to the adults who surround children to share that the so-called hard sciences are not at odds with the arts. Parents and teachers have the opportunity to regenerate a Flynn Effect for creativity, helping children to resist a slump by embracing and modeling the ideas that creativity can operate within boundaries and that eureka is not a moment but a process.