Send us your own collective nouns for animals or for people, and we'll publish the best of them in the March Bulletin

You know that a bunch of sheep crowded together is a flock, a group of antelope loping together a herd, a cluster of fish swimming together a school, and a crowd of bees buzzing together a swarm. But have you ever heard of a crash of rhinoceroses, a cowardice of curs, a labor of moles, a clowder of cats, a drove of kine, a covert of coots, a kindle of kittens, a gam of whales, a bale of turtles, or a knot of frogs?

Most of these collective nouns evolved during the Middle Ages, when the sophisticated art of hunting demanded an equally sophisticated vocabulary to name the objects of the chase. Ever since God commanded Adam to name all the creatures that run and fly and swim and crawl and burrow above, on, and under the earth, we humans have been relentless in gathering those beasts and birds into clusters.

a barren of mules, a bloat of hippos, a business of ferrets, a caravan of camels, a cete of badgers, a coalition of cheetahs, a dazzle of zebras, a dray of squirrels, a leap of leopards, a memory of elephants

a mischief of mice, an obstinacy of buffalo, a pace of asses, a pod of seals, a pride of lions

a route of wolves, a shrewdness of apes, a singular of boars, a skulk of foxes, a sleuth of bears

a sounder of swine, a tower of giraffes, a trip of goats, a troop of monkeys, a warren of rabbits

Now here’s a flight of 30 avian assemblages, a groupie list that’s truly for the birds:

a cast of hawks, a charm of finches, a congregation of plovers, a convocation of eagles, a covey of quail

a descent of woodpeckers, an exaltation of larks, a flush of mallards, a gaggle of geese, a huddle of penguins

a murder of crows, a murmuration of starlings, a muster of storks, a nye of pheasants, an ostentation of peacocks a paddling of ducks, a pandemonium of parrots, a parliament of owls (so Mensan!), a piteousness of doves, a plump of wildfowl

a rafter of turkeys, a scold of jays, a siege of herons, a stand of flamingoes, a tiding of magpies

a ubiquity of sparrows, an unkindness of ravens, a wake of buzzards, a watch of nightingales, a wedge of swans (when flying in a V formation)

I Invite You To Become A Groupie

For fun, make up your own collective nouns for animals or for people — a prickle of porcupines, an aroma of skunks, a rash of dermatologists, a brace of orthodontists, a pollution of politicians, a hoard of misers.

Send your creations to me, and we’ll publish the best of them in the March issue. Limit of five per contestant. Please include your address and the name of your Local Group.

The deadline is Jan. 31. Three winners will each receive a signed and inscribed copy of my book Challenging Words for Smart People. 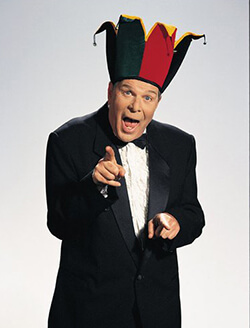 Senior Bulletin columnist Richard Lederer is the author of 50 books about language, history, and humor, including his best-selling Anguished English series and his current books, The Joy of Names, A Treasury of Halloween Humor, and A Treasury of Christmas Humor. He is a founding co-host of “A Way With Words,” broadcast on Public Radio. He has been named International Punster of the Year and Toastmasters International’s Golden Gavel winner. A former president of San Diego Mensa, he has received multiple National Chairman’s Service Awards.