A Proustian journey back to semipro wrestling

… so in that moment all the flowers in our garden and in M. Swann’s park, and the water-lilies on the Vivonne and the good folk of the village and their little dwellings and the parish church and the whole of Combray and its surroundings, taking shape and solidity, sprang into being, town and gardens alike, from my cup of tea.

I can seldom give much thought to my earliest days in professional wrestling.

I can say with certainty it isn’t repression so much as inability. Sure enough, there are times when a thought, a memory, will arrive and permit me to dwell just momentarily before receding back into the arbitrary mechanism that chooses, at random, the ephemeral impressions of things past. Memory, exercising its fierce independence from my consciousness, having given me no way to retrieve the past through my own volition, chooses the item from its inventory and the time of delivery, irrespective of my own effort or desire. So memories arrive like small, transitory clay bricks, one at a time. With no blueprint or mortar at my disposal, they exist independently of each other, lacking cohesion or order. And, each day, memory reclaims one brick and may, feeling predisposed, replace it with another. Or, perhaps, not replace one at all.

I recall what memory allows me to recall. Eating with my daughter in a small diner, there is nothing about wrestling in the front or back of my mind, so far as I can tell. I order and we talk about her dance classes and her opinion on the oppressions inherent in elementary school. She asks nothing, ever, regarding my wrestling, and so the topic can only emerge should I initiate it. But I am unable to initiate because initiation lies beyond my own conscious capability. So far is it removed that, in the moment of eating, it can’t even be called part of my past because nothing about it is carried with me. Those memories must exist within another being who went forth, in a diagonal direction, from my present self at each infinite point in the past.

We eat, eggs over light and runny. I dip toast into the yolk, and she utters a peculiar phrase. “Do you always sop your toast in your eggs?” I wonder where she learned, being 9, the word sop, a distinctly southern term I suppose she would scarcely have heard in her dealings with young dancers and fourth-grade boys. I answer, “Of course” but don’t follow up on the question of where she heard sop in her multitudinous, though generally homogenous, peer interactions.

Instead, the word seems to thrust a lever into the automatic and impenetrable door that separates my consciousness from my memory, holding it open ever so briefly, allowing the inhabitants of both to intermingle. My consciousness, mimicking my appetite, hungrily gathers memories closest to the open door, pulling them in and pushing them to the surface of my mind. While the memories gather and swirl, I go to take a sip from my coffee cup. I insert my finger through the small handle and, for the first time, notice a small ring of coffee outlining the base of my cup. The coffee, having formed a translucent coating around the white porcelain, achieves its color once more as it gathers itself into a ring upon the table.

For a moment, I remember the rings of coffee inside the all-night diners of southern Georgia. Huddle House or Waffle King. The smaller towns lacked corporate Waffle Houses. We, the wrestlers, our women, and wrestling women, would gather after a late show. The waitresses, exhausted and overworked and utterly harassed, would pour, clumsily, black coffee into our cups, forcing much of it to cling to the outside while it slid down clear and reappeared as the black ring that demarcated my cup’s spot on the table.

My friend and partner, eating runny eggs and toast, states aloud he likes to sop his toast in the yolks, and I remember it all. The glorious early years of a passionate and unfulfilling love affair with professional wrestling. Under the booth, I play footsie with another guy’s girlfriend as she sits next to him, occasionally holding his hand and eyeing me at the same time. He’s holding his championship belt on his shoulder, and I’m embarrassed for him in any number of ways. I order the most food because I’m the only one with a decent day job, and I offer to pick up checks for a few fellas we booked out of both pity and necessity.

An hour before, we wrestled in front of 50 people. What percentage was family or paid varied on the night and the divorces and the breakups and the new girls. The venue was a small, empty shop with the drop ceiling removed so we could ascend the ropes — steel cable run through a black plastic tubing that sounded like shaking maracas as we rebounded back into the waiting arms of disaster. A choke slam, a back body drop, a clothesline, all forcing a bump upon a ring as stiff and unforgiving as the life we all so desperately attempted to escape.

Twelve hours before, the early afternoon, I drive the long hour to Lyons. After the army and college, I never move back home and, instead, live totally alone in the wilds of south Georgia. Instead of dating, I’m wrestling. Up early from my apartment in Savannah, I head west to the culminating event of my week. Taking my time and exploring every backroad route, navigating southeastern Georgia as well as any satellite. The hour-drive turns to two or three.

Sixty miles due west into the oblivion of soybean and onion fields, abandoned gas pumps, rusted and busted pole barns, and trailers, trailers, trailers. Like AM radio waves, hills modulate the coastal plain. Hills with no amplitude. Hills that can’t be described as rolling but merely bubbling the landscape like toasted cheese.

I arrive at the building, a corner lot between a small church and another, the thousandth shambolic trailer park. The trailer behind the building boasts a handwritten notary public sign, and we use it for myriad reasons: statements of divorce, car-buying, and marriages. Waiting on me is a gaggle of “trainees” — local, skinny, broke wannabes who need to be a part of the pretending. No doubt, pretending is the very force driving their survival. Pretending they’re tough. Pretending they can subsist. Pretending God didn’t single them out as being unable to lift the weight of life. They shuffle around the front door, smoking cigarettes and snooping the huge pile of trash the previous tenant left behind and that we keep in memoriam. Baggy pants and wife-beater T-shirts that pudge at the middle but invert about the arms and chest. Crooked stick figures, ghosts of Lyons.

I have them run the ropes and conduct some drills as I turn on the lights. The dressing room is a small, crudely walled-off section of the concrete-floored shop area. I kick Dr Pepper cans out of the way and head through the draped curtain that serves as the wrestler entrance. The guys are running around the ring, holding up their pants and trying not to trip.

There it is, the ring. The squared circle of my dreams. I could spend hours alone, walking through imaginary matches, feeling the tension of the ropes, meditating in its center. From apron to busted drop ceiling, a glamorous proscenium. A junky theater-in-the-round. The ring.

I look up from the coffee ring on the table and back to my daughter, asking about my eggs. I look down again, and it suddenly resembles a swirling toilet. I reach and grab a napkin from the steel dispenser and wipe it away. I ask about her dance practice. 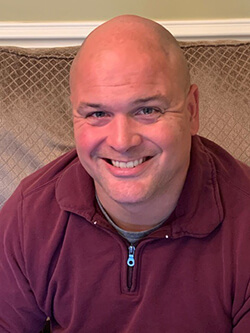 Drew is a former soldier and semiprofessional wrestler. He lives in Greenville, S.C., with his wife and four kids.