Life in Poland During a Humanitarian Crisis

A country familiar with the tragedies of war welcomes its neighbors by the millions during the Ukraine fighting.

Poland, like few other countries, remembers war. Throughout our nation’s history, we have been victims of aggressors and occupiers for centuries. During World War II alone, almost 6 million Poles died. We remember it and know what tragedies are connected to armed conflicts, especially for civilian victims. Millions of people flee, leaving behind the lives they knew, hoping their physical lives can be saved.

Today, Ukrainian fathers fighting for their country have had to say goodbye to their families without knowing if they will ever be seen again. Women and children headed west toward Poland. Some stayed at home, hoping that it was just a bad dream, an episode, a short game of the mighty. Those who managed to cross the Polish border experienced things they never expected.

Unfortunately, the tragedy affects everyone. Young children do not understand war. They do not understand why everything has suddenly changed. Separation is terrible, so too is knowing a hug from your father or mother could be the last.

As Poles, we try to help both refugees and our neighbors fighting on the front. Fortunately, we are not alone. We are helped by millions of people from the European Union, the United States, and other countries that also see the human tragedy and do not condone such aggression. Unfortunately, the pace of the growing crisis is too great for us to deal with everything institutionally. That is why ordinary Polish citizens, including members of Polish Mensa, are helping.

The number of refugees is growing. The first three weeks of the war brought more than 3.2 million refugees, of which Poland took in two-thirds. For a country of 38 million, this is quite a burden. Still, this did not stop people of goodwill from welcoming those fleeing the war into their homes, giving them financial support, and, above all, providing kindness. We organized funds, food, and other necessities for life and began transporting and lodging people by the thousands the day war broke out. Today, it’s hard to find someone here who does not help in one way or another.

The aid is not temporary. Many homes in Ukraine have been demolished. Poland is ready to accept Ukrainian citizens and help them acclimatize to our country. Ukrainians have gained access to free medical care, and schools are being established to help them learn the Polish language, which will facilitate their contact with the people of our country. There are also places being created for remote learning in the refugees’ native language, which is made possible by the infrastructure installed in Poland that provides internet access throughout Ukraine. Numerous reception points and hotlines have been set up to help refugees understand the myriad administrative and social issues. There are many job offers for refugees, and many radio stations broadcast announcements in Ukrainian. Many companies offer free services such as translation and psychological support. Others provide accommodations or organize charity events, donating the income to those in need. Polish railroads have provided free transport. It is impossible to count all the initiatives.

Members of Polish Mensa have also made significant contributions. Many have opened their homes to refugees. Many help financially. Mensa members from other countries have also joined the campaign, and their support is huge. To organize, we have created a Facebook Group, Mensańska Pomoc Ukrainie / Mensa Help for Ukraine. There is no need to deceive ourselves: The situation is dramatic. Not only is financial support needed but also help relocating refugees. More waves are expected with millions of people looking for shelter and kindness. At first, many of the refugees arriving in Poland were more affluent. They had resources. Cars. The more recent refugees are poorer, often fleeing with but one bag and arriving with no ability to speak the native language. There are tens of thousands of refugees in public spaces such as train stations.

We are appealing to the world to help. I hope Mensa members, given a chance to make the world a better place, will use their abilities to do so. 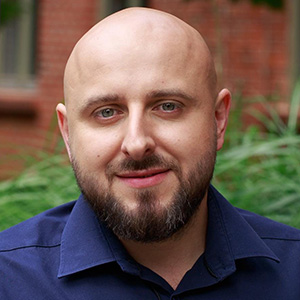 After joining Polish Mensa in 2019, Piotr immediately began to volunteer, including starting a Mensa chapter in his hometown of Olsztyn. In March 2020, he was elected to the board of Polish Mensa. A 38-year-old IT manager, Piotr recently moved to Gdansk and remains very active in Mensa both on the board and in his local chapter. He has led an international life, including working for 15 years as a DJ in England and Poland and working for others and running his own businesses in the event, marketing, and IT industries.