We might not be living in the Matrix, but that doesn't make you real.

The idea that we might all be living in a computer simulation is almost cliche these days. Long the preserve of niche science fiction stories, the idea gained popularity through TV’s Star Trek and the Matrix movies before being dusted off and granted a veneer of respectability by Oxford philosopher Nick Bostrom in his 2003 paper “Are You Living in a Computer Simulation?” Since then, the theory that we are all characters in a historical simulation running on the computers of some future civilization has exploded in popularity. The argument has convinced many, including luminaries such as Elon Musk and Neil deGrasse Tyson. The logic seems unassailable: If people can be simulated in a computer and computing power continues its inexorable increase, it follows that the vast majority of humans will inevitably be simulated — including you and me.

The arguments tend to gloss over a rather important caveat, however. I’d like to drag your attention back to that initial if, a small word doing a lot of heavy lifting. One of the rarely examined assumptions of the simulation hypothesis is that consciousness is substrate-independent. That is, whatever the process is that makes people self-aware, it can work as well on silicon as on squishy, biological brains. Physical scientists, including programmers and engineers, tend to treat the idea of replicating human consciousness with computer code as an eventual certainty. It’s all just a matter of time and scale. Throw enough MIPS and FLOPS and other techie acronyms at the problem, write clever enough code, and voila — self-awareness, agency, and consciousness will just pop out.

But what if it doesn't’ ? What if, at a fundamental level, consciousness doesn’t compute? Many cultures insist humans have some ineffable essence — a soul — and tales of ghosts and reincarnations and afterlives abound. You might chalk all that up to wishful thinking, and evidence from years of brain research would certainly weigh against those ideas. After all, we can see different areas of the brain light up in CT scans with different thoughts, and even the personality, the “humanness” of people, changes with damage to the physical brain structure.

A counterargument is that the brain is the equivalent of a radio receiver for the soul. Damage the receiver, and of course the signal is distorted. Alternatively, the field of quantum biology would suggest that many life processes, such as photosynthesis, avian navigation, and our sense of smell, are actually the macro manifestation of micro quantum activity. One theory by Nobel laureate in Physics Roger Penrose and anesthesiologist Stuart Hameroff suggests that our self-awareness and sense of agency result from non-computable quantum processing performed within the brain’s cellular microtubules. A quantum consciousness might be orders of magnitude — if not wholly impossible — to simulate on a computer. (Their theory, from the 1990s, was recently given some experimental legs from research led by Jack Tuszynski at the University of Alberta in Canada. Researchers claim the experiments on tiny structures in brain cells bolster the idea that quantum effects might explain consciousness.)

Whatever the reality turns out to be, we cannot discount the possibility that the hard problem might prove too hard. It might be that consciousness needs physical human brains and there is no way to simulate it in a computer, no matter how powerful or fancy the programming. Are we then safe in assuming that we are not fake people in a replica world, non-player characters at the mercy of outside programmers? Are we the one and only true original?

Probably not. Arguments for the computer simulation hypothesis often mention The Sims computer game or role-playing games and how much more sophisticated they would be in an advanced civilization. How “advanced” is advanced, though? Perhaps we imagine 30th-century teenagers playing Earth Sim on their Xbox 6 Million, but Bostrom’s paper speculated about something altogether grander — post-human super civilizations building planet-sized computers. That’s more akin to the Type III civilization proposed by Soviet astronomer Nikolai Kardashev, one able to control the energy and resources of a whole galaxy. (Types I and II are in control of, respectively, a planet and a star. We might get to Type I in 300 years.) If we’re talking about a civilization so far beyond us that they can build planet-sized computers, is it unreasonable to consider they could build planet-sized planets? Perhaps they could run their simulations the hard way by recreating Earths in their entirety as actual worlds populated with actual people? I’ll call this version the Real Simulation Hypothesis.

There are some obvious snags. We don’t know how to build planets, for a start, but then, a tribe of cavemen didn’t know how to build the Hoover Dam. We can only speculate about how difficult the construction of 100 or 1,000 almost-Earths scattered around the galaxy would be. Perhaps it would be a trivial exercise for an unimaginably powerful Type III civilization; perhaps it would be their equivalent of Hoover Dam-hard. Still not unimaginably difficult for a suitably motivated, galaxy-spanning society. Like the idea of a computer-simulated existence, the idea of building physical duplicates of Earth has been explored in fiction. One of Terry Pratchett’s first novels, Strata, imagines the universe as a model created by super-advanced beings who scatter fossilized watches among dinosaur footprints for fun. Alastair Reynolds’ novel Century Rain has space dotted with frozen “quantum snapshots” of historical Earths. Neither, though, really addresses the simulation aspects of their situation. The 2005 Hitchhiker’s Guide to the Galaxy movie had protagonist Arthur Dent taken on a tour of a planetary construction site. The alien planet designer Slartibartfast showed him continents being fitted like floor tiles and mountains lifted into place by giant cranes. Doubtless this will look just as quaint to future planet builders as 17th-century woodcuts with flocks of swans pulling explorers to the moon do to us.

We’d have to replicate people, too, of course, though I suspect that might be easier than replicating a planet. They would have to be grown en masse, like seedlings in vast human greenhouses, and filled with era-appropriate false memories. Again, a difficult though not impossibly difficult task to imagine. Another objection might be astronomy. We have records going back millennia on star patterns. Patterns that would not be replicated in any faux Earth’s sky.

Still, have you ever looked at the stars? You can maybe see the hunter in Orion if you squint and use a lot of imagination, but is that squiggle a plow, a bear, or a pot? Is that one a fish or a crab? Mesopotamian culture gave us the constellations we know today, though it was the ancient Greeks 2,000 years later that made them part of horoscopes. Different astrologies developed in China and India, each with its own constellations and interpretations. Aboriginal Australians had their own constellations 10,000 years before that, with the great Emu in the Sky stretching from the Southern Cross to the Coalsack Nebula and Orion as three brothers fishing in a canoe. Bostrom talks about his planetary-size computer simulating the entire mental history of humankind by “using less than one millionth of its processing power for one second.” We don’t need the whole of human history, just the astronomical records part. Rewriting memories of different stellar positions to match myths and legends to whatever patterns of stars were visible in each Earth-analogue’s sky would be a relatively trivial computational exercise in comparison. It might be that the poor match between the star patterns we see and their eponymous animals is because they are not the original patterns but just the closest matches the memory editing software could find in a strange sky.

The truth is that we have no idea how consciousness arises out of the chemical and electrical soup of the human brain, let alone how to replicate it in computer code.

The Real Simulation Hypothesis has advantages over the computer version too. Aside from the fact that physical human copies would be the only game in town if consciousness can’t be software simulated, the Earths, once set up, run themselves. You wouldn’t need to tie up computer resources; you wouldn’t need to power them; and no one could argue about the verisimilitude of the physics! Were the experimenters sufficiently callous, it would also be relatively trivial to erase and repopulate any particular mock Earth were the experimental results insufficiently interesting.

Evidence is necessarily hard to come by, but the logic is the same as the computer simulation theories. If it can be done at all, it’s reasonable to assume that, given time, it will be done a lot. In either case, Earth, you, and everybody else are statistically unlikely to be the original. The double slit experiment, déjà vu, and the Mandela effect have all been cited as possible glitches in the programming for the computer simulation hypothesis. (Though Occam’s razor would shave those down to incomplete theories and bad brain wiring.) The Real Simulation Hypothesis is, I admit, even more speculative, but consider: Maybe all those UFO and alien sightings are just researchers from the super civilization checking in, and tales of abductions and probing just tissue sampling from the body politic. 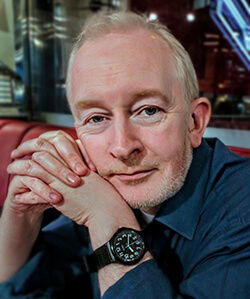 Paul is a graphic designer, amateur photographer, part-time writer, and lifelong science geek who, as a kid, sat way too close to the TV to watch the moon landings. He writes the “Occasional Book” and “Crazy Idea” columns for the British Mensa magazine and can be contacted through his intermittent blog, TheOccasionalBook.com.