The Agony and the Ecstasy of Co-authoring a Novel

Perennial bestseller Nelson DeMille on his writing partnerships, including the latest with son Alex

I’ve written 21 novels, two of them with a co-author. It may be true that many hands make for light work, but I can tell you that two brains working on one book is not half the work for each — it’s double.

To get down to cases, the first of my two co-authored books was Mayday, published in 1979 and written with my childhood friend, Thomas Block. I had already written a bestseller, By the Rivers of Babylon, published in 1978, and I was at work on Cathedral, which would be published in 1981. Cathedral would have been written and published earlier, but I got involved with Mayday, which the editor assured me would take “less than a year” to write because there were two authors working on the book. Well, I found out the hard way that this math didn’t work.

Tom Block was a US Airways pilot and an aviation magazine writer, so he had the credentials to co-author this airline disaster novel. Also, we were friends since about age 5, so we could work well together. What could possibly go wrong?

Well, everything. Mostly it was a clash of egos, but also a struggle to get two different writing styles to sound like one. Also, Tom had left Long Island, where I still lived, and had transferred to Pittsburgh. Today, with the internet, email, and other technological wonders, including FaceTime and iPhones, you can get your business done anywhere, as we’ve seen with the Covid lockdown. But in those dark ages, high-tech meant an answering machine and a home fax, if you even had one of those. So, logistically, collaborating on a novel was a challenge and time-consuming. Basically, Tom would bang out a chapter on his IBM Selectric typewriter and send it to me by U.S. Postal Service.

By the time I got the chapter, he’d be working on the next, going forward without my input on the chapter he’d sent. I’d edit his chapter with my red pencil or sometimes retype the entire chapter, or at least some pages, and send it back to him by mail. Often, he’d disagree with my editing and rewriting, and he’d write a memo or call, explaining why he disagreed, and so forth. It became clear early on that two authors were not going to write a novel in half the time that one author could write the novel by himself.

It’s difficult for creative people to collaborate in any of the arts, and it mostly doesn’t work out well, as I’ve seen in the book-publishing business. But when it works, it’s because each writer respects the other and is open to learning something new.

Another problem, which was unforeseen, was that our editor was put into a position of having to arbitrate the writing disputes. In effect, the editor had to choose sides. Sometimes one of the collaborators is the dominant writer, and the other writer acquiesces to the more established and experienced writer. But in this case, I think my and Tom’s friendly childhood rivalries turned into something toxic.

The friendship was damaged, though it ultimately survived, but I vowed never again to collaborate on a novel, as did Tom, who went on to write novels on his own. He and I look back on this now and call it the Agony and the Ecstasy.

You might think that with all these writing problems Mayday would have been a critical and commercial disaster. Oddly, it was not; Mayday got wonderful reviews, was a bestseller (and is still in print), and went on to become a CBS Movie of the Week, starring Aidan Quinn.

“In typical DeMille fashion, the last hundred pages move along like a ballistic missile, exploding in a satisfying finale on a remote airstrip. DeMille and son provide it all in this rumble through the jungle—authentic detail, lively dialogue, a vividly drawn setting, and an exhilarating plot.”

Then a few years ago, I got new literary agents and signed a three-book deal with a new publisher, Simon & Schuster, who were keen on the idea of me also writing three — not one, but three — co-authored books. My first reaction was, No. Followed by, Never again.

But never is a long time. Close to 40 years had passed since Mayday, and with so many bestselling authors finding co-authors to work with, I gave the idea some thought. Certainly, the technical challenges of co-authoring were a thing of the past, but the human element remained. If I teamed up with an established author, I’d find myself in the same situation I’d been in 40 years before: distinct writing styles and clashing egos. This would work only if I could find the right co-author.

Enter Alex DeMille, my son. Alex is smart — Yale, then UCLA Film School, where he got his MFA. Alex is an accomplished screenwriter with many writing awards, including a Judges’ Choice Award at Comic-Con for his short film “The Absence,” which he wrote and directed.

I called him one night and made the pitch. His reply was No, thanks. I mentioned the generous advance that the publisher offered for a co-authored book. His response was Maybe.

Alex eventually agreed and dove into the world of the novelist. Together, and without many problems, we wrote The Deserter, which debuted at No. 3 on the New York Times Best Seller List in October 2019.

There were, of course, some glitches along the way, but too few to mention. Technology helped in the process of me getting his first-draft chapters instantaneously by email. And he got my editing and rewrites back within 48 hours.

More importantly, Alex understood from screenwriting how to plot a story, introduce and develop the characters, write dialogue, and set a scene.

As for the different writing styles, we learned how to mimic each other and came up with a synthesized single voice.

All in all, it was a very good experience for both of us and actually brought us closer together.

It’s difficult for creative people to collaborate in any of the arts, and it mostly doesn’t work out well, as I’ve seen in the book-publishing business. But when it works, it’s because each writer respects the other and is open to learning something new. Alex brought his youth and his energy to the project and taught me some interesting words and 21st-century expressions that I, in my 70s, wasn’t aware of. The main characters in The Deserter sounded their age, which was mid-30s, and they thought and acted age-appropriate. I brought my 40 years of novel-writing experience and knowledge to the table and, together, when mixed and blended in the right proportions, my son and I created a tasty treat for our readers.

Alex is currently writing the first draft of the second co-authored novel in The Deserter series, tentatively titled No Man’s Land, which I will read soon. I am writing my solo book, titled The Maze, featuring my ongoing character John Corey in his eighth literary appearance.

Someday, Alex will be writing his own solo books, and I will be on the beach with a piña colada. A star fades; a star is born. 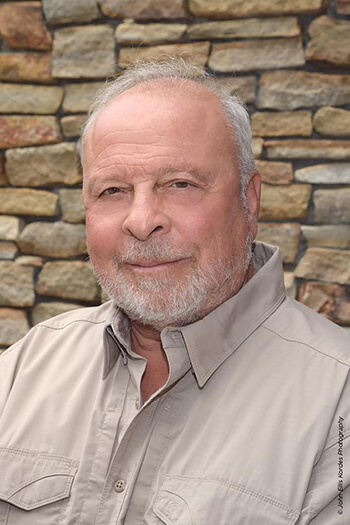 Nelson’s first major novel was By the Rivers of Babylon, published in 1978, and is still in print as are all his succeeding novels. He’s written 21, 16 of which were bestsellers, and seven were No. 1 New York Times bestsellers. He is a member of The Authors Guild and is past president of the Mystery Writers of America. He is also a member of International Thriller Writers and was chosen as ThrillerMaster of the Year 2015. He holds three honorary doctorates: Doctor of Humane Letters from Hofstra University, Doctor of Literature from Long Island University, and Doctor of Humane Letters from Dowling College. Nelson has three children, Lauren, Alexander, and James, and resides on Long Island.