The Fine Art of Snowplowing

'Buddy, today we're gonna plow you out an education'

Oh, plowing the snow’s an art, no question about it. Takes years of experience to get’er down good and proper. So there ain’t no way the city’s gonna turn loose a young tenderfoot like you in a blizzard like this — not on his own, anyways.

Rest of the day, what you wanna do is just set there and watch me as close you can, like you was witnessing a crime or some such. Watch my hands. If you got any questions, pipe up. Otherwise, just set there, keep your yap shut, and soak in the wisdom.

You got enough room for that big behind of yours over there? Good. ’Cause you ain’t exactly a bantamweight, no offense. Don’t touch nothing ’less I tell you to.

Now, this big ol’ contraption we’re riding in’s called a Caterpillar wheel loader. Can you say that? Lemme hear you say it. Good. Got a diesel engine, hydrostatic four-wheel drive, high-lift arms, a pin-on snowplow, and Bridgestone tires. You won’t find these tires at your local Walmart. Plus, she’s got a buncha other crap that you don’t need to know about just yet. Cut my teeth on one of these about a hundred years ago. Keep your hands offa that.

What with all this white stuff piling up like the sands of Iwo Jima, you might be wondering how I can judge where the hell I’m going; you should be, anyways. Well, I tell you, it ain’t easy. But there’s a real slight depression where the roadbed is. See where I’m pointing? I go by that and by my memory of where the road should be — I know these roads like I know the fuzz on my wife’s backside.

Strategy is, you wanna clear the middle of the road first, then go back and widen the path. Hit the primary roads and then the secondary. Anything below secondary we don’t touch. Open up the sewer drains wherever you can. When it’s coming down like this, sometimes the snow’ll mess up your windshield wipers; be like looking at the world through a pair of three-martini glasses. Anytime that happens, pull over, get out, and clean them bad boys off. Common sense, but some of the new guys we get ain’t smart enough to unzip before they pee.

You warm enough over there? No? Good. Cold air’ll keep you alert. ’Cause it’s always a temptation on a day like this to let your mind wander. Snow starts to drift, and your mind can drift right along with it. I can’t claim it’s never happened to me, neither. If I did, you’d look me right square in the eye and call me a bald-faced liar. No, sometimes when I’m clearing the roads, I’ll catch myself thinking about warmer places, better times. I’ll catch myself thinking about my loved ones. My wife, for example. Eloise. I think about her probably more’n I should.

You married? No? Well, it’s an up-and-down, wiggly-waggly road, I’ll tell you that. Kinda like the one we’re on right now.

Me and Eloise “got married in a fever, hotter than a pepper sprout.” Remember that tune? June Carter, Johnny Cash. Eloise’s my fourth wife, best one so far. Which don’t necessarily make her a hundred percent flawless perfect. She’s got her strong points — makes a helluvan egg salad, for one thing — and I think the world of her. On the other hand, she don’t always walk the straight and narrow, if you know what I mean. Look at that snowman over there. Looks like my cousin Efrem after a night on the town…. No, she don’t always walk the straight and narrow.

About a week, 10 days ago, I seen her Mini Cooper parked up here in front of Hank Dipper’s place. I could tell it was hers by the black-and-white cow skin seat covers inside; I begged her not to buy them things, but she’s got a soft spot in her heart for cattle. So later on I asked her what in the hell was she doing up here, and she said she was hanging out with Sue Ann Stegmaier, old school chum. But I know for a fact that Sue Ann lives the next street over, Shady Drive. I know that ’cause me and Sue Ann used to be hot for each other, and I’d slip around up here myself.

That’s Hank’s blue Suburban over to the right, setting underneath that fir tree. He’s got ’er all nice and broomed off, don’t ask me why. Looks like a damn Christmas card, don’t it? All we need is three wise men leaning up against the rear hatch.

Interesting thing about SUVs is how the sideview mirrors stick out on ’em — stick out like the ears on a fourth-grader that wants to grow up and be a dairy farmer or some such.

OK, now watch how I do this. I raise the plow to the level of that mirror sticking out there — watch my hands — bear to the right just a whisker and … presto change-o. Didja hear that sound it made when I sheared that sucker off? Ka-runch! Music to my ears. Like breaking somebody’s thumb off his thieving hand. Now we put the plow back down where it was. See how I did that? Good. And we’re back to work. Don’t think that won’t cost Hank a pretty penny, neither. Prices these days … God almighty.

Learned that trick offa man named Jump Bevins. Taught me most everything I know about the fine art of snowplowing. I miss Jump. He retired about 14, 16 years ago. Helluva fine man. Died last Easter, cirrhosis of the liver. Only time Jump ever refused a drink was when he misunderstood the question.

Man, that snow’s a-comin’ down, ain’t it? I’d say we’re getting two inches an hour, maybe more. Buddy, today we’re gonna plow you out an education. 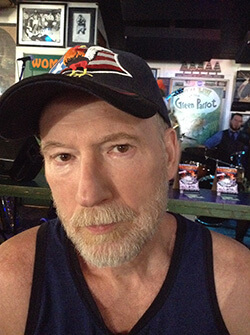 Greg is the author of the critical study Stanley Kubrick and the Art of Adaptation and the novel A Face in the Sky. His short stories have appeared in journals ranging from Weirdbook to Prairie Schooner. He lives in Maryland.