In the Pacific, a soup of swelling trash threatens marine life and biodiversity

The Pacific Ocean, the largest and deepest water mass on Earth, stretching from Asia and Australia on the west to the Americas on the east, is home to many beautiful creatures swimming in its depths: graceful blue whales, magnificent green sea turtles, and … a soup of swelling waste.

Over the past few decades, a country-sized section of trash in the central-north Pacific Ocean has coalesced. Its actual footprint is difficult to measure precisely, but estimates have the Great Pacific garbage patch covering an area somewhere between the size of Texas and Russia.

Waste from landfills, including chemical and industrial wastes, radioactive wastes, and sewage material, has been dumped into the ocean for about as long as there have been landfills. It wasn’t until the late 1960s that researchers really started monitoring the dumping and the early 1970s that governments started trying to mitigate the damage.

In 1972, Congress enacted the Marine Protection, Research and Sanctuaries Act (or Ocean Dumping Act), implementing the requirements of the Convention on the Prevention of Marine Pollution by Dumping of Wastes and Other Matter of 1972. Otherwise known as the London Convention, it was the landmark international agreement to protect the marine environment from human activity. While the degradation has continued, these agreements have helped us get a better handle on the damage.

The process of waste collecting in oceans begins with people’s trash being collected for landfills. After that, spare waste travels through waterways, sewers, and storm drains, eventually leading to the sea. This wouldn’t be a problem except that most trash isn’t biodegradable, or naturally decomposed by bacteria. Most waste, according to the Environmental Protection Agency, consists of metals, rubber, glass, and plastic — 5.25 trillion pieces of which reside in the ocean, National Geographic estimated in 2017. This leads to a steady supply of visible marine pollution along with another less obvious environmental complication: microbeads.

Microbeads are small plastic particles that appear in toothpaste, face washes, and other assorted household cleaning products. They’re implemented into said cleaning materials for exfoliation or abrasion. And while biodegradable materials such as pumice or jojoba beans can serve the same purpose, companies use less effective, cheaper plastic alternatives, often for the purpose of being less effective — customers then have to purchase more of the products.

These beads greatly impact marine life and biodiversity. A 2013 study by the Korea Institute of Ocean Science and Technology looked at microbeads ingested by copepods, small crustaceans present in almost every freshwater and saltwater habitat and vital to their ecologies. The study found increases in mortality rates and decreases in fertility among those organisms that are so important to marine food chains and the carbon cycle.

In a 2012 study, Belgian scientists studying microbeads in marine wildlife found that on average each gram of mussel contained two particles of plastic, and lugworms contained three.

After a 2016 Vancouver Island University study on clams and oysters across British Columbia, shellfish biologist Sarah Dudas succinctly summed up her team’s findings: “When you eat clams and oysters, you’re eating plastics as well.”

Microbeads’ impact on marine ecosystems has proven so profound that governments have gone as far as banning them in certain products. Canada, France, India, Ireland, Italy, the Netherlands, New Zealand, Sweden, South Africa, Taiwan, and the United Kingdom all have varying bans in place, as does the U.S. and a handful of states, though most of the restrictions are limited to rinse-off cosmetics.

A primary consequence of any marine pollution is a reduction in biodiversity. Biodiversity is the variety of life in an ecosystem, and the Pacific Ocean — no surprise because it covers about a third of the planet — has more marine life than any other ocean. More than 70 percent of the world’s fish are caught there, and it contains twice as many coral species as the Atlantic. Those species, however, are at risk of extinction if more creatures ingest plastic floating in the sea.

For example, the Center for Biological Diversity estimates that 60 percent of seabirds have consumed plastic at least once in their life, with that figure expected to be 99 percent by 2050. Fish in the North Pacific, it estimates, ingest 12,000 to 24,000 tons of plastic each year. And research indicates that half of the world’s sea turtles have ingested plastic.

In addition, other studies have proved that high concentrations of plastic increase the probability of beach corrosion.

Ocean pollution could take a great toll on humans. As plastic endlessly drifts through the ocean, it can be mistaken for food by unsuspecting fish or other marine wildlife. That plastic is consumed and enters the organism; this organism could be caught in nets by ships and sold to consumers, who themselves then become hosts of the tiny pieces of plastics. That’s in addition to the chemical pollutants that work their way up the food chain. Many popular fish species contain high levels of mercury and polychlorinated biphenyls.

There are solutions. For example, algae is used in many facilities instead of plastic, and biodegradable plastics are made using corn oil, starch, and orange peels. To combat the trash already in the ocean, oceanographers and other inventors have deployed a variety of booms, platforms, and floating devices that collect junk in the water. The efforts are helpful but not enough to mitigate existing and future pollution’s risk to the oceans.

And avoid using disposable plastic items. Use permanent plastic or tin bottles rather than a single-use, flimsy plastic one. Bring your own fabric bags to the grocery store instead of opting for plastic. Avoid contributing to the microbead outbreak by staying away from products that contain them. Beatthemicrobead.org has a robust list of products both safe and detrimental to the environment.

You can also be part of the cleanup. Volunteer opportunities abound for those who live near the shore. By picking up trash from the beach, you can save the lives of countless animals.

And spread awareness by talking to friends about their consumption and recycling habits.

As time passes, Earth becomes more and more polluted, and humans are failing to preserve what was given to us so long ago. These steps might seem small and insignificant, but collective action is the only way we can stop hurting and start healing the only planet we call home. 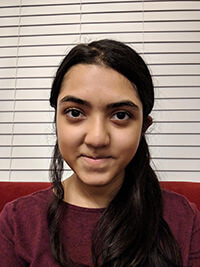 After spending her early childhood in Southern California, Abir moved to Texas, where she is now a freshman at Liberty High School in Frisco. She has a strong interest in psychology and the medical field and in her free time likes to read mystery novels, draw manga-style art, make jewelry, and practice graphic design. She also has a strong love of cats, dark chocolate, and anything pastel.
North Texas | Joined 2017