The Psychedelic ’60s Saved My Life

You see, I absolutely wanted nothing to do with baby dolls and baby doll milk bottles and baby doll diapers. I hadn’t a maternal bone in my body, and I still don’t (except where cats are concerned). This lack of a desire for motherhood would have condemned me, in the eyes of our forebears; and, as an “unnatural” woman, I would have been considered mad, evil, or deficient.

I preferred other toys to baby dolls. Although I knew my way around an Easy-Bake Oven, I rejected the play cooking and cleaning sets. I cannot imagine how one could find fun in a plastic vacuum cleaner. I liked the Magic 8 Ball (which freaked my parents out), board games, Etch A Sketch, Spirograph, and Lite-Brite. But mostly, I liked clothes, books, and Barbies. Barbie also has trunks full of clothes, but she doesn’t require feeding and diapering. Instead, she is an educated woman with a wardrobe that attests to her high school and college educations: junior and senior prom gowns, homecoming and fraternity dance gowns, and a graduation cap and gown. It is no wonder she loves clothes; she has a marvelous figure; and, notwithstanding the snide comments of jealous people, she is not in the least bit anorexic. (Her ribs do not show.)

Barbie’s figure is gorgeous because she is healthy: She plays tennis and croquet, is an equestrienne and a cheerleader, and enjoys aerobics, bicycling, rollerskating, skiing, and ice skating. In addition, she is a disco queen, rock star, jitterbugger, and ballroom dancer. Dancing is great aerobic exercise, good for both the heart and the figure.

Barbie is a career woman. In high school, she is a babysitter and fashion model. After graduation, she moves up the ladder to fashion editor, student-teacher, registered nurse, artist, pediatrician, and veterinarian. She serves in all of the different branches of the armed forces, is President of the United States, Chancellor of Germany, a firefighter, lifeguard, astrophysicist, engineer, and astronaut. She buys her own dream house and car. She has a boyfriend and loads of other friends, male and female, of various ethnicities. She has never been married. She has parents (present only in the novels) and a little sister named Skipper (later, a baby sister and brother), but she has no children of her own. Confidently, she travels the world, sampling all manner of different pastimes and occupations. An independent woman, she writes her own story, never neglecting to take pride in her appearance. In short, Barbie creates her own life her own way.

The books I read in elementary school feature intrepid heroines, too. Nancy Drew, left on her own way too often by her lawyer father and surrogate mother housekeeper, finds herself in all kinds of predicaments and then extricates herself from harm’s way by her wiles, in the process putting a lot of crooks behind bars and saving people’s lives and property. Trixie Belden, whose family is less affluent, is the same sort of teenager. Both Trixie and Nancy have boyfriends, but they operate independently of them. Neither girl is lovesick — they have an awful lot to occupy their minds and their time besides boys. Then there is Cherry Ames, a nurse whose curriculum vitae includes nursing school, the Army Nurse Corps in World War II, flight nurse, boarding school nurse, cruise nurse, and rest home nurse, among numerous other jobs over the course of 27 novels. A single woman, she solves mysteries while helping sick people.

Thankfully, I grew up in a time when nonconformity was dreamy, when individuality was groovy, and when stereotyping people was considered bad form.

As modeled by Barbie and the girl sleuths, the independent woman was also represented in the television programs I enjoyed. Doris Day was my favorite actress. I owned all her LPs and many of her 78s, which I bought at yard sales, and wrote out all the lyrics to all her songs on sheets of ruled notebook paper. Her 39 movies were rerun on TV all the time throughout my tender years. Doris Day wears beautiful clothes, as Barbie does, created for her by the very best fashion designers. She has an attractive figure, healthy and slim but not skeletal, and I longed for her matching dresses and coats, especially the beaded, sleeveless white gown. Single sometimes and married at other times, she plays women who think for themselves, a paradigm that is the basis of many of her comedies. It’s funny how the male leads go all to pieces whenever she ventures outside the box. In On Moonlight Bay and By the Light of the Silvery Moon, she plays a forward-thinking young woman at the turn of the 20th century. In the musical comedy The Pajama Game, she fights for better wages for factory workers. When she plays a housewife to a professional man, she tends to upset the status quo by seeking her own career and self-fulfillment above and beyond the rewards of housewifery and motherhood.

She endangers James Garner’s sense of manhood in The Thrill of It All. As a single career woman, she shakes Clark Gable’s sense of journalistic superiority in Teacher’s Pet. And she competes with Rock Hudson on Madison Avenue, which causes him to feel emasculated in Lover Come Back. In her various thrillers, she plays the helpless victim and the resourceful victim, and even a secret agent. Throughout these roles, Day maintains her femininity and haute couture while asserting her right to selfhood that is not limited by marriage and family. While she loves her children and her husband/suitor and is sensitive to their needs, she also asserts her own. Many of her movies end with marriage and hopes of happily ever after; however, there is always a sly hint that the little woman is not going to be a doormat.

Unlike many others at the time, I was not shocked or amazed by the single women protagonists of That Girl, Mod Squad, and The Girl from U.N.C.L.E. After all, I grew up surrounded by strong, single women. I preferred shows such as I Dream of Jeannie, Bewitched, and Batman — I wanted to be both Batgirl and Catwoman. These shows all feature strong women (all single, except Samantha Stevens), who wear beautiful clothes straight out of Vogue and have fantastic adventures, male admirers who revere both their beauty and their brains, and know-how to chart their own courses in the rough seas of paternalistic entitlement, still finding room for romance and comedy in their lives.

Favorite among my childhood shows was Dark Shadows, whose female leads take on vampires, werewolves, and witches; fall in love and solve mysteries; and never get married or have children. Victoria Winters is a single young woman, orphan, and governess. Maggie Evans is a single young woman, waitress, and later a governess. And Dr. Julia Hoffman is an older single woman, psychiatrist, hematologist, and occultist. I also liked Scooby-Doo and Land of the Giants, whose investigative teams include brave and brainy ladies. The women of my childhood television programs were not angry women’s liberation movement crusaders; my on-screen female heroes took their personal freedoms for granted, and they taught me to by example. It simply never occurred to me that I could not do something because of my gender.

Other ’60s television taught me that I have the right to choose my Mr. Right rather than waiting demurely for him to find me. On The Dating Game, unmarried women are “bachelorettes,” a thrilling designation, and not old maids or spinsters. On That Girl, a happily single Ann Marie is in no hurry to wed. Other programs, such as Night Gallery and The Twilight Zone, stress individual rights over oppressive societal norms. Growing up in the ’60s, I did not have to choose an -ism ⁠— feminism, traditionalism, socialism, capitalism…. I was exposed to all kinds of ideas. I did not have to make the either-or choice of career or motherhood, which required my mother to quit college when she got married. Inductively, I learned to suspect authority figures who claim to possess the only right answers because I had been shown many alternative visions.

Had I grown up in an earlier century, I would have been branded a heretic, a madwoman, or a criminal, simply because I do not kowtow to traditional gender roles. Thankfully, I grew up in a time when nonconformity was dreamy, when individuality was groovy, and when stereotyping people was considered bad form. I was allowed to grow into an intellectual woman who loves clothes and vampires as well as history and belles-lettres and who has worked to promote animal rights. Outta sight! 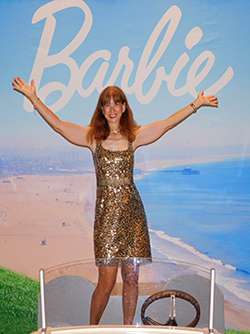 Katherine is the author of Creepy Cat’s Macabre Travels: Prowling around Haunted Towers, Crumbling Castles, and Ghoulish Graveyards — a nonfiction travel memoir to destinations associated with macabre stories in history, literature, and film — as well as numerous horrific short stories and nonfiction in anthologies and journals. Educated in history and literature, she has a B.A. from John Carroll University and an M.A. from Case Western Reserve University. She is a member of the Jane Austen Society of North America, the Horror Writers Association, the H.P. Lovecraft Historical Society, and the Dracula Society. Visit CreepyCatLair.com.