Founded originally as GaySIG, the group later became Gay & Lesbian SIG; and as of July 2022, we are named QueerSIG. This latest name change marks a critical inflection point toward greater inclusion of American Mensa’s LGBTQ+ members and represents the most significant update to the SIG’s identity in more than 30 years.

At the SIG’s inception, the founders intended simply to build community among LGBTQ+ members of American Mensa. Against the backdrop of anti-LGBTQ+ legislative efforts across mid-1970s America, the mere founding of GaySIG was itself something of an act of revolution. American Mensa rejected GaySIG’s initial constitution and later approved the group’s formation following a revised approach. Representation of LGBTQ+ people in popular media was flippant at best, and safe gathering spaces were few and far between.

To envision GaySIG during these formative years is to recall, or to imagine, a world prior to the manufactured convenience, ubiquity, and immediacy of smartphones. A printed newsletter, Le Gambit, served as GaySIG’s sole communications and engagement medium, and it was published and mailed to members on a monthly basis for many years — until and in parallel with the advent of the bulletin board system and, of course, the internet.

Alongside these digital innovations, GaySIG’s founders recognized the need to establish a physical space in the existing 1980s Mensa ecosystem for LGBTQ+ Mensans to commune safely and hospitably. This materialized most appreciably in the form of a suite at the host hotel of American Mensa’s Annual Gathering, the costs of which GaySIG members absorbed themselves.

This “SIG Suite” inaugurated with a small handful of members, almost exclusively cisgender gay white men who appreciated retreating to a private space where they could be openly themselves, away from the hubbub of the AG’s array of activities. Around 1990, in a move toward broader inclusion, GaySIG became known as Gay & Lesbian SIG. And through the 1990s and aughts, what began as an insular safe haven for LGBTQ+ AG-goers grew into a communal space open to Mensans of all alignments and colors, accepting donations from suite visitors to offset the costs of the SIG-procured bounty of snacks and libations.

Today, the SIG has become a staple presence at all AGs, notably celebrating our 40th anniversary in grand fanfare at the San Diego AG in 2016.

The world of today is different from the world of 1976. Mainstream acceptance of the LGBTQ+ community has grown considerably and in concert with key policy progression. In 2010, the repeal of Don’t ask, don’t tell was signed into law, striking down the rule that had discriminated against the military service of LGBTQ+ people for nearly 20 years. Just last year, a Gallup poll found that 71 percent of Americans favored marriage equality, which the U.S. Supreme Court upheld as legal in 2015, enabling same-sex couples in all 50 states to access more than 1,100 marriage-related federal rights and responsibilities. A community that was once unmentionable away from major urban centers is now a routine matter of discourse. These victories were hard-fought by generations of advocates, activists, and allies, and today we are fortunate to enjoy the fruits of those arduous labors.

Conversely, while LGBTQ+ acceptance has broadened among the general public, a vocal minority is exacting harm against the LGBTQ+ community and seeks to eradicate our many decades of social progress. This anti-LGBTQ+ subset is lodging this coordinated attack diabolically and methodically through our nation’s legislative channels. Nationwide, 2021 saw a record 191 proposed anti-LGBTQ+ bills, and there were more than 300 such bills in 2022. By this measure, today’s world is not so different from the days of yore when it was, literally, illegal to exist openly as LGBTQ+.

Acknowledging this extant suffering and choosing to rise above it, the SIG and the SIG Suite have blazed their own paths toward growing popularity. What was formerly a safe place for some to hide progressed into a place for all to be fierce among friends; from a secretive “Hey, just pass our suite number along quietly” to “The AG Committee invites all Mensans to visit this absolutely fabulous SIG Suite.” It was never lost on the SIG’s founders and loyal members that kinship among themselves and their allies was a choice. That intentional and loving choice is what has led to the prominence of our SIG as one of American Mensa’s most celebrated and embraced.

Such brings us to this moment of our renaming. As American Mensa progresses toward broader acceptance and inclusion of people who are different, so too must the SIG evolve — in spite of, and perhaps explicitly because of, the nation’s dispiriting legislative landscape. Updating our name is one way we aspire toward this greater inclusion. Through numerous and sometimes difficult conversations among the SIG, and through simply reading the room of the wider societal arena, the SIG’s consensus dubbed “Gay” and even “Gay & Lesbian” to be too restrictive and contrary to our intention toward radical inclusion of our expansive community. From these discussions emerged a distinct frontrunner: “Queer.”

What was formerly a safe place for some to hide progressed into a place for all to be fierce among friends.

Defined in many ways by many sources, “queer” has gained consensus among the community to mean “not heterosexual and not cisgender” — in other words, beyond the norm. (How very Mensan.) Technically, “queer” maps expressly to the Q in the canonical LGBTQ+ moniker. Yet, in the broader panorama, prevailing usage of “queer” positions the word as an efficiently descriptive umbrella that comprises the full LGBTQ+ spectrum.

This popular acceptance arguably finds its roots in the late 1980s and early 1990s during the emergence of “queer theory” as a new field of critical theory around LGBTQ+ studies. Not only does this field of study thrive to this day, but also our nation’s arts and entertainment spaces currently abound with such gems as Queer Eye, Queer Tango, and the annual National Queer Arts Festival. Today, we commonly see and hear our contemporaries articulate “queer people” when referring to the sum LGBTQ+ community, inclusive of people who are bisexual, transgender, questioning, intersex, asexual, pansexual, aromantic, two-spirit, nonbinary, and gender nonconforming — people whom “Gay & Lesbian” would otherwise omit.

We must not, however, discount that “queer” was once a term of anti-LGBTQ+ abuse, even causing harm to a number of our own SIG members. Including me. This harm was real and valid, and some of our SIG’s most seasoned members carry this legitimate hurt with them today.

Equally, our SIG acknowledges that from this pain must come growth. No longer shall our name center only one or two letters of the LGBTQ+ acronym to the exclusion and erasure of our members who identify as bisexual, transgender, or more. No longer shall we permit the previous hateful usage of “queer” to sully the positive power of the word itself. As other words have progressed in meaning through semantic shifts — think “gay” and “dyke” — so, too, can our SIG and our community reclaim “queer” as a term of unity and empowerment. So we have chosen.

“Queer” might be imperfect; but it is useful, it is necessary, and it is here. Quite like QueerSIG.

As QueerSIG forges ahead on our unrelenting path toward radical inclusion, we remain optimistic. We hold out hope that LGBTQ+ empathy and acceptance will continue to grow among society’s sensible many despite the contrary efforts of the twisted few. We foresee the welcome arrival of a new generation of trans, nonbinary, questioning, and, yes, even gay and lesbian SIG members who will not need to struggle quite so hard in accessing our safe, brave, and affirming space in Mensa. And all the while, we acknowledge that our onward success will always be predicated on the courage of our founding and longtime SIG members on whose shoulders we all stand.

We close with our official description in the American Mensa SIG Listing: “QueerSIG provides a comfortable meeting space for gay, lesbian, bisexual, and transgender members. All Mensans are welcome.” We would love for you to join us.

For more information on QueerSIG, including how to join, email queersigm@gmail.com. 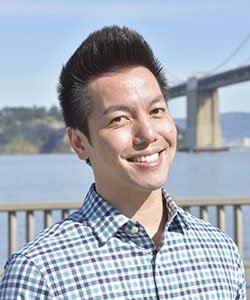 Nguyen Pham (he/him/his) is the first openly LGBTQ+ Trustee of the Mensa Foundation and is President of San Francisco Pride, one of the world’s largest annual celebrations of LGBTQ+ culture and heritage.