You Gotta Crawl Before You Can Fly

Before crewed vehicles head to space, there's a long haul to the starting line

Sixty years ago, NASA initiated the design of one of its most useful but least-known and slowest-moving vehicles. All the large space-launch vehicles up through the first Apollos were assembled on the pad, surrounded by movable platforms for the army of technicians connecting parts and testing systems. This process could take months. Doing the assembly and some of the testing in an enclosed building would make this work go faster and more safely, a significant factor for a vehicle towering more than 300 feet off the ground.

The new Launch Complex 39 (LC-39) for Project Apollo would have most assembly and testing in the Vertical Assembly Building (VAB, now called the Vehicle Assembly Building) with at least four assembly bays. Plans also included two launchpads spaced far enough from each other and the VAB that an accident at one would not prevent the next launch from happening on schedule.

The safe distance between launchpads in the early days of spaceflight was in the hundreds of yards, and many of them were built in pairs with a shared control center. But with the expected thrust needed to get a payload to the moon, that distance lengthened to miles. NASA needed a way to transport thousands of tons of launch vehicle and tower for that stretch and do so in the naturally unstable vertical position because the Saturn launch vehicles would be too tall and heavy to lift if assembled horizontally.

Laying down four sets of parallel tracks that would stay aligned not only horizontally but vertically in the soft, marshy Florida soil was going to be a significant challenge. The rail concept didn’t attempt to make a big square platform negotiate curves but involved installing perpendicular or rotatable bogies that could be raised and lowered to make the 90-degree direction change when required.

An alternate transportation method had the launch platform floated from the VAB to the pad via a canal system. It would then be jacked up like a drilling rig on foundations in the canal system for launch. The floating launcher would dock either inside the assembly building or just outside, with the vehicle rolling in by rail like a train boarding a ferry. By January 1962, NASA was considering a barge transportation system that dispensed with tugs by having extensions overland with rail power, like old canal boats being pulled by draft animals onshore.

The third option, a latecomer to the design competition, resulted from a chance discussion between engineers about cranes. As a result, Barry Schenk, a representative from the mining equipment company Bucyrus-Erie, brought information about its tracked mining power shovels to Florida to sell the concept of a tank-treaded mobile launcher with hydraulic cylinders to keep it level and adjust the height as needed. NASA was sufficiently impressed to send a team a few weeks later to see one in action at a Kentucky mine.

At first, the study envisioned building five tracked launchers to manage the projected vehicles necessary to maintain the Apollo program’s expected launch schedule. When the cost seemed excessive, the concept was revised to have separate launch platforms that would require two crawler-transporters that rolled under them like a car lift and elevated the platform for transport. Although splitting the mobile launcher into a motorized lower unit and separate removable launch tower added weight and complexity, it would also permit the crawler to be used for different-sized launchers at a time when the launch vehicle design was still in progress.

A few months later, NASA studies pointed favorably to the crawler concept, and it solicited bids in December 1962. Although Bucyrus-Erie appeared to be the frontrunner, the company was underbid by Ohio-based Marion Power Shovel Company, which contracted to build the two crawlers for $9.1 million; the eventual price tag ended up totaling $14 million.

Each of the crawlers’ tank-like bodies below the launch platform’s four corners is powered by four 375-hp electric motors driving two belts — of which each metal link, called a “shoe,” weighs more than a ton — and each has independently operated hydraulic cylinders that can raise their corner of the platform to either keep it level or raise the entire platform up to 6 feet. There are four onboard diesel engines, two 2,750-hp ones for the DC propulsion system and two 2,200-hp ones for the AC power system. Its top speed unloaded is listed at 2 mph, with fuel consumption of about 165 gallons per mile.

The crawler’s first test was in 1965, and it successfully drove and carried a load, but the uneven distribution of weight caused the behemoth to shed pieces of broken bearings in its wake. These problems were fixed by the 1967 launch of Apollo 4, which began LC-39’s active launch career. The two crawlers took all the subsequent Apollo vehicles to the pad, its last the 1975 Apollo-Soyuz mission. The American Society of Mechanical Engineers designated them as National Mechanical Engineering Landmarks in 1977, but their careers were just beginning. There was then a dormant period before the decision to separate the crawler from the launcher proved its worth. Whereas Launch Complex 39-A and 39-B (Pad A and Pad B to locals) had to undergo significant modifications to host the space shuttle program, such as new towers designed to accommodate the differently shaped and sized vehicle, the crawler was just fine, like a locomotive switching from pulling a passenger train to a freight train. All the shuttles and their launch platforms rode to the pads on the unmodified crawlers from STS-1 in 1981 until STS-135 in 2011.

Let's take a closer look.:mag:
Today at @NASAKennedy, the crawler moved under the mobile launcher, @NASA_SLS rocket and @NASA_Orion spacecraft ahead of carrying them to Launch Pad 39B on June 6 for our next @NASAArtemis I wet dress rehearsal test. pic.twitter.com/0FNPN3JTe3

When NASA began developing Project Artemis to return to the moon as a steppingstone to sending the first people to Mars, the now-vacant LC-39 was the only site considered. The Space Launch System (SLS) rocket with a liquid-fueled center stage like Apollo would be surrounded by two tall solid rocket boosters like the space shuttle to surpass the Saturn V as the most powerful launch vehicle ever, and it would require crawler power to travel on the ground.

Unlike SpaceX’s autonomous drone ships for booster recovery, which have names such as Of Course I Still Love You, Just Read the Instructions, and A Shortfall of Gravitas, the two crawlers go by their original designations, CT-1 and CT-2. The crawler measures 131 feet long and 114 feet wide with an empty weight of more than 3,300 tons. When compressed, the crawler’s height is 20 feet, but it can elevate itself to 26 feet. The SLS mobile launch platform that sits on it is 158 feet long and 133 feet wide, with a tower more than 300 feet tall. For comparison, the SpaceX barges measure 300 feet long by 170 feet wide.

With the SLS vehicle onboard the crawlers’ platform, its total weight is close to its seagoing SpaceX cousins’, albeit riding on steel treads atop a gravel bed like a human standing on a short-legged coffee table supported by four giant tortoises.

For the current SLS vehicle that will power Project Artemis, the impressive load capacity of close to 17 million pounds was not going to be enough to support what will be the most powerful rocket ever built. (The space shuttle and launch platform weighed a mere 12 million pounds). With SpaceX now occupying Pad A, only CT-2 was given an upgrade and overhaul that increased the rated load capacity to 18 million pounds.

Two parallel 40-foot-wide roads with a grassy 50-foot median form the crawlerway, where a layer of Tennessee river rock atop a bed of compacted dirt and gravel distributes the weight into the soft earth below. From the air, it looks like a divided highway wide enough for three lanes in each direction but without lane markers. Up close, it looks like the cobblestone roadway of a historic central district. Like a monorail train and its track, the crawler and crawlerway form their own transportation network not linked with anything else but its passengers. 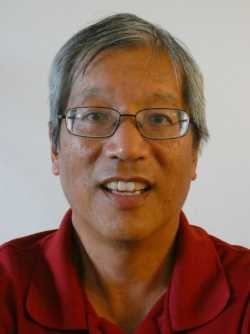 As a teen, Gilbert fell under the influence of other airheads and spaceheads who became the charter members of their school’s Aerospace and Aeronautics Club and launched model rockets. After many orbits of the sun, this east Tennessee resident finds himself on a job assignment at Kennedy Space Center, where they launch the real stuff.