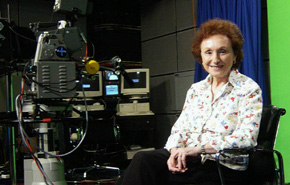 ARLINGTON, TEXAS (1/31/15) — The Mensa Education & Research Foundation named Dr. Joan Freeman of London, England, the recipient of the 2014 International Lifetime Achievement Award. The award recognizes a lifetime of contributions to the field of intelligence, giftedness and related subjects. Dr. Freeman was presented the honor by the former Chair of Mensa Hungary and former International Director of Development, Bibiána Balanyi at the European Talent Centre meeting held in Hungary.

Dr. Freeman is a British psychologist with a considerable body of research, including her ongoing study of giftedness that began in 1974. Her expertise has made Dr. Freeman a sought after guest for television news programs and worldwide speaking engagements on the subjects of intelligence and giftedness. Freeman is a Visiting Professor at Middlesex University in London, the Founding President of the European Council for High ability (ECHA) and an elected Fellow of the British Psychological Society.

Dr. Rena Subotnik, the 2013 Lifetime Achievement Award recipient, nominated Dr. Freeman. In the nomination, Dr. Subotnik said Dr. Freeman "…served as a model for scores of others around the world in the realms of research, practice, and advocacy. Through her excellent networking skills she has capitalized on her talents in public speaking and writing to the benefit of education, psychology, and the well-being of gifted children around the world."