A rock-solid relationship gets blown to bits

I woke as dawn leaked into my room, borne on gentle breeze, smelling of fresh-cut clover. I stretched in the delight of three months’ vacation before starting high school.

I was thinking about fishing in Grandpa’s pond when the explosion shook the house, rattling windows and terrifying the fowl into attempts at flying the coop with clipped wings.

I could see a cloud of dirty brown smoke rising over the clover field. I threw on jeans, T-shirt, and sneakers and ran for the back door. It looked like the war on the rock was on again.

“Jimmy, you stay out of the way,” Mom cautioned as I ran through the kitchen. “You know how grandpa gets when he’s on the warpath.”

“Yes, Mom,” I said, leaping down the back stairs and banging through the screen door.

A monster it was, elliptical in shape, as big as a school bus. From the county road it looked like some humpbacked marine leviathan breaching the stillness of an emerald-green sea.

Easy to climb in summer, it became the crow’s-nest of the brigantine Revenge, firing broadsides at the King’s Navy, or the last bloody stand of Crockett and Bowie at the Alamo. In our Michigan winters, it became Everest, an almost impossible challenge to bulky snowsuit-covered bodies, clumsy mittened hands, and slick rubber boots.

I first climbed it when I was 3. My parents walked me a half-mile through waist-high wheat to see it. Dad showed me how to crawl up to the smooth black and sun-warm top of it. To me, it was a wonder of nature. But to my grandfather it was never more than trash discarded by a glacier from the last ice age.

Most farmers would be content to simply avoid the megalith, giving it wide margin with their equipment. Grandpa would not yield an inch of fertile land to its massive presence. The bottom edge of the rock was scarred by numerous contests with his plows, cultivators, and other farm machinery. More than once the rock damaged his equipment, forcing him to lose time repairing some critical part. This angered him enough to attack with whatever dynamite he could find that day at the supply store.

He would buy a few sticks and use a posthole digger to augur a narrow tunnel down the side of the rock then lower the dynamite to the bottom of the holes beneath the edge of the boulder. The explosion never did much except scare the neighbors, leaving a depression that would quickly fill with rain-washed topsoil. I think Grandpa was giving the rock a warning, and a lot more dynamite could be used if he wanted.

For years it had been Grandpa versus Nemesis, the name he’d given it, with the rock winning every round and surviving every attack with nothing more than scratches, quickly fading, leaving faint witness to each assault repulsed. Today was different.

I saw a strange white van bouncing across the field toward the rock. Grandpa followed in the green pickup he and Grandma went to church in.

I ran toward the rock. As I arrived, I saw “Wentworth Explosives” lettered on the side of the white truck. Nemesis was riddled by large cracks and had fractured internally into dozens of massive pieces.

“Only took 30 boreholes down about 15 feet,” I heard the stranger say. “Three sticks in each hole, all detonated together.”

I watched Grandpa gazing at the destruction before him, slowly nodding, his enemy finally vanquished. “I’m amazed,” he said. “Thank you,” as he shook the man’s hand.

Grandpa introduced me. “Clarence, this is my grandson, Jimmy.”

Clarence smiled at me and said, “We’ll finally get the rock out of your Grandpa’s field tomorrow.”

Clarence laughed, thinking me clever, and left in his truck, leaving Grandpa and me alone with the remains of the rock.

“Careful,” he said. “Pieces might shift. Stay away from the big cracks.”

“OK,” I nodded, beginning to climb. The top was pockmarked with grayish stained boreholes but otherwise looked undamaged. It was still smooth and warm to the touch, and somehow that comforted me.

I hoisted the Jolly Roger and repelled boarders before lying on my back, thinking of the times I’d spent here. I remained still until Grandpa drove away, leaving me alone with my old friend.

Amid the whir of grasshoppers and the mournful chorus of doves, I pressed my face against the smooth, warm comfort of my childhood and began to cry. 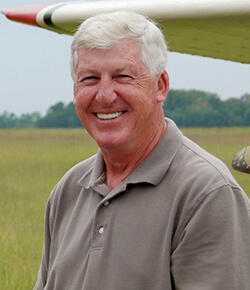